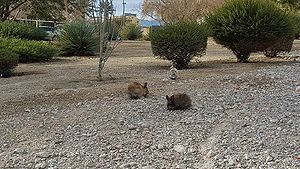 A few graphic stories of domestic rabbits rescued from the streets:

To report a sighting of a lost or stray rabbit, contact your local rabbit shelter and/or rescue. You may also wish to file a report on the Abandoned Rabbits Tracking Map website for information tracking purposes.

If you have never had a rabbit before, please take a look at our Getting started with a rabbit guide for the supplies you will need in the long term if you wish to keep them. Otherwise, please contact your nearest rabbit rescue or shelter for help and guidance. Rabbits may rarely be microchipped - you can visit a local veterinarian or shelter to try to scan for one.

You can also post a notice of a found pet on your local classifieds and put up a few local flyers to find an owner if you suspect the rabbit escaped. Realistically though, most rabbits found, especially in parks, are dumped and abandoned pets. Sites in the US where you can post found pet ads include Pawboost, Craigslist, and NextDoor among others.

In the meantime, to keep the rabbit safe in your house if you are unprepared, you can use your bathroom, bathtub, a large or extra-large dog crate, or a very large box. If there is slippery tile, put down some bed sheets or towels for traction as rabbits do not have paw pads and will slip and slide on tile and hardwood. Leave a bowl of water, and give a few handfuls of some fresh green vegetables to the rabbit. If you have no vegetables, you can hand cut a bowl full of lawn grass. If possible, make a trip to the local pet store to buy some hay. Do not feed copious amounts of carrots - these are actually treats and not a regular part of their diet.

If you have your own rabbits, please be sure to keep any new rabbits strictly quarantined to prevent transmission of diseases such as parasites, rabbit hemorrhagic disease, and myxomatosis, among many others.

This should generally go without saying, but unless you have veterinary training or have consulted with a rabbit-savvy vet beforehand, please do not self-medicate rescued rabbits, especially with over-the-counter drugs. The results can be fatal.

Please visit https://www.abandonedrabbits.com for the locations of abandoned rabbits colonies and areas affected by RHDV2.