From WabbitWiki
(Redirected from RHD)
Jump to navigation Jump to search

"This transmission electron micrograph shows rabbit calicivirus isolated from the liver of an infected rabbit." - source 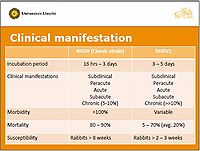 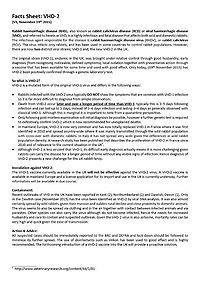 How is RHD transmitted?

The RHD virus is spread by oral, nasal, and other parenteral transmission. It is present in urine and feces from infected rabbits. The virus can survive for 10-19 months at room temperature outside the host.[1]

Specifically, research has shown that the virus can survive the following situations: [2]

It is thought that wild birds carried the infection from Europe the the wild rabbits in the UK. The disease is also incubated in wild hares that can carry the virus without clinical effect.[1]:89

RHD may be transmitted directly from contact with wild rabbits and hares or indirectly through footwear and clothing. Contaminated plants picked from areas grazed by infected rabbits can also be a source of infection.

How can RHD be disinfected?

Effective disinfectants for RHD after 10 minutes of exposure include the following:[3][4]

Some further resources on preventing and containing RHD:

RHDV1 is the original strain of RHD, first discovered in China in 1984. In the UK, this strain seems to have died out and has been replaced by RHDV2.[5]

Baby rabbits can have a natural immunity under 4 weeks of age and develop a life-long immunity if exposed to the disease. They become increasingly susceptible until 6-10 weeks of age.[5]

Two vaccines against RHD are available in the UK:

RHD has a short incubation period of 1-4 days, and the virus replicates in many tissues including the lung, liver, and spleen. Symptoms will generally manifest in three ways:[5]

It is believed that non-pathogenic strains of RHD (RCV) can be responsible for protecting rabbits by stimulating antibody production. Investigations in Australia and UK have revealed its presence.

RHDV2 is a new variant of RHD first discovered in a French rabbitry in 2010 and identified in Italy in 2011 and in the UK in 2013. However, retrospective analysis of samples suggests that the infection has been in the British Isles since 2010.[6]

Unlike the original strain of RHD, rabbits under 4 weeks of age have no natural immunity to RHDV2. It also appears to affect hares.

Two vaccines against RHDV2 are available in the UK:

Clinical signs of RHDV2 are the same as RHDV1 except they develop after 3-9 days instead. Subacute or chronic infections are more frequent so more rabbits may survive.

RHDV1-K5 is a variant of RHD that is more lethal than RHDV1 and appears to have less cross-immunity with non-pathogenic strains. It has been deliberately released in Australia to kill wild rabbits. Vaccination against RHDV1 protects pet rabbits from this disease.

European brown hare syndrome (EBHS) affects wild and farmed hares of the species Lepus europaeus and Lepus timidus. The disease was first reported during the 1980s, and it occurred simultaneously in many European countries. 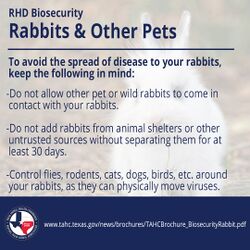 All strains of RHD are prevalent throughout Europe.

You can find a map of reported RHD2 cases in the UK at RHD2map UK.

The following are articles with more information about RHD in Europe:

Australia also has a number of variants of RHD.

The following are more articles with information about RHD in Australia.

The source of infection in past American VHD outbreaks is not known. However, these may not be only outbreaks to have happened in the past.

The current status of RHD in the US can be found here.

The rural household had 5 pet rabbits, not bred or shown. "Three animals had previously been found dead in the last couple of weeks, and the fourth was taken to an exotics vet for diagnosis. A postmortem was done, and the alert and knowledgeable veterinarian knew that a check for RVHD was in order. Contact was made with the OH State Veterinarian's office and samples were sent to Plum Island's Foreign Animal Disease Diagnostic Laboratory, where testing revealed RHDV2.

The Ohio Department of Agriculture (ODA) will work with state and federal partners to conduct surveillance of wild rabbits near the location.

29 Sep 2018: Pamela Alley posted a Q & A response from the USDA/APHIS by Donna Karlsons (USDA/APHIS Public Affairs Specialist). FADDL (Plum Island) found that "The whole genome sequencing indicated that the virus was very similar to the one detected in Canada." VIN news service reported that the virus found in Ohio was first identified in France in 2010.

12 Oct 2018: Twelve rabbits died at the Fairfield County Fair and initially it was thought that the virus had spread to Lancaster, Ohio (210 miles or 338 km). Over 300 rabbits were put under quarantine. The test result found pneumonia... the 12 rabbits were let to die by not giving them antibiotics.

The following are experiences with RHD: