Rabbit syphilis, also known as treponematosis, vent disease, or venereal spirochetosis, is caused by the bacterium Treponema cuniculi. This is not a zoonotic disease and can be passed by direct and sexual (venereal) contact.[1]:222

Transmission is through direct contact with infected skin or from infected dam to kits at birth. Incubation periods are long, lasting up to 10 to 16 weeks.[1]:235

It is a self-limiting disease; carriers may be asymptomatic until stress occurs.[1]:235 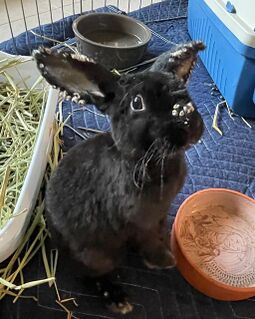 A rescued rabbit at South Florida House Rabbit Rescue from a hoarding case with syphilis. NOTE: Clicking on the image will show the full resolution graphic image. [source]

Other symptoms include the following:[1]:222

Affected female rabbits can also have the following symptoms:[1]:235

Bucks are often asymptotic carriers and may have small star-shaped stars on their scrotum.[1]:222

A skin biopsy sample with silver staining can confirm a diagnosis of rabbit syphilis.[1]:222

Rabbits with syphilis are effectively treated with repeated injections of penicillin.[1]:223 Penicillin should never be given to rabbits orally. Remove nursing kits from dams during treatment to decrease the risk of their developing penicillin-associated enterotoxemia.[1]:236

Tetracyclines and chloramphenicol can also be effective.[1]:223 Many strains of syphilis have been tested to be resistant to azithromycin or erythromycin.[2] Please note that erythromycin is contraindicated in rabbits due to its ability to incite gastrointestinal disease.

The following are some experiences with rabbit syphilis.

Here are libraries on rabbit syphilis.