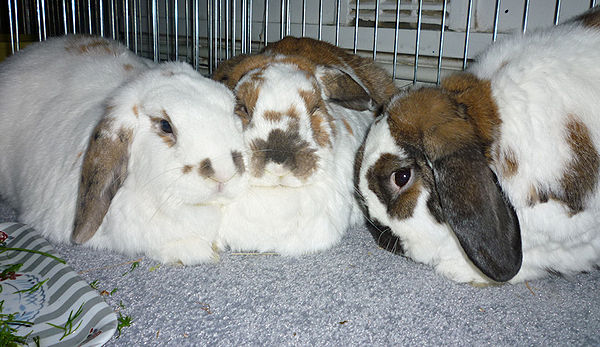 Below centre is Moss the day after the accident. You can see her left eye is closed. This was before the jaw break was diagnosed, with her family around her for comfort. The white bunny Horatio is leaning against her jaw on the side where the break is, almost as if to keep her warm.

Moss is a free roam bunny day and night and has been since very young. She sleeps on a wicker chair in my kitchen as she is normally a sensible bunny and is my alpha female. At night I like to keep the door open so I can hear the bunnies from my bedroom, but it is barricaded off by a tall pen piece attached to the door frame on one side and clipped to it on the other. I also then use a solid piece of board of the same height to stop her from seeing through to the lounge at night. The night of this accident I had another bunny sick, so Moss had not been into the lounge for her evening cuddle. I now wish I had found some energy to cuddle her because I believe if I had this would not have happened.

I believe she was looking for me that night and stuck her head through a very small gap between the pen piece and the door frame, then realizing she could not get through, tried to reverse. But she was then stuck and began to panic in her efforts to get free. I heard the sound from my sleep of the pen piece being shaken with enormous force. I got up and when I got to the kitchen I could see Moss who was by then in a tonic state and honestly looked dead. I don’t know how long she had been struggling. It was 3 am on a Friday night/ Saturday morning.

Realizing what had happened I gently opened the clip that held the door and she came round and ran into her pen. I could see from her gait her limbs were fine, but she was mouthing and her right eye was closed. I got Metacam (meloxicam) and subcutaneous fluids ready and picked her up to look at her eye injury. It looked bad (diagnosed as a corneal ulcer caused from the struggling to get free - recovered in 2 weeks with fucilthalmic vet eye ointment). What worried me most was that she may have damaged her teeth as she was "mouthing" excessively. I gave her a dose of oral Metacam and 50 mls warmed sub cut fluids for the shock and I took her into the lounge and cuddled her for an hour until she seemed to recover herself a bit. Moss is a rabbit who enjoys being handled.

The offending pen piece and door attachments were removed so this could not happen again.

I noticed in the following days that Moss's face seemed swollen and she could not eat at all without Metacam on a high dose twice a day and would not take the oral Metacam syringe at all without throwing her head around which I wanted to avoid, so was I gave her injectable Metacam. Her regular vet was not on duty that weekend so I took her as soon as he was back. Initially doing a dental inspection he found she had bitten the inside of her mouth on one side and one of her back molars had pierced the mucosa. Her teeth were all solid and none were broken. (She had no dental spurs incidentally and had never had a dental before). He said her jaw seemed still to be good and her bite was intact. We, therefore, treated her for the mouth wounds with fluids and Metacam for the pain. When I took her home I realized she could eat no HAY at all despite trying. It seemed like the larger side to side jaw movements needed to chew hay was too painful. She could, however, manage the up and down and small side to side movement needed to eat pellets (Hay required bigger side to side movement than pellets. This is why rabbits fed pellets or preferring pellets over hay tend to develop spurs, as the crown surface of the molars is not fully worn).

Still, she lost 0.7kg in a week! With hindsight, the vet admitted we were misled by the superficial wounds and should have done an x-ray right away despite her jaw seeming strong on palpation and her bite appearing normal.

After 1 week I took her back to have her mouth looked at and her eye. Both had healed well, and she continued on Metacam and eye ointment for another week. However, she still could not eat hay and her gut was suffering. I asked the vet to check her teeth again just in case one had been broken below the jawline. He did so and again reported all intact but in just a week *small spurs had formed on one side of her teeth only which he removed gently, and this time he noted her bite was very fractionally out and there was still swelling on the opposite side of her face to the injuries.

A skull x-ray was done: on the left-hand side, there was a fracture visible behind the back teeth almost on the hinge of the jaw. He consulted with a specialist orthopedic vet who said they do pin cat jaws but that the results are often very poor, that the wounds break down and the plates do not hold requiring repeat operations and trauma for the pets. These operations can cost in excess of £3,000 GBP.

As Moss was able to eat a pellet and was now on a higher dose of Metacam (bid) and me realizing I needed to give her more pellet, the vet left the decision to me. I decided NOT to put Moss through surgery for the following reasons:

So I decided to treat Moss for pain and supplement her diet. Gradually over the next two weeks, she regained most of her weight. She was fed Alfalfa hay (the soft leafy bits) for extra calcium, soft brown bread, oatbran, pumpkin seeds and sunflower kernels, science supreme pellet ('mature' with higher fibre for her gut), plain dry porridge oats, flaked almond (for magnesium to assist bone healing), chopped up herbs and grated broccoli (for vitamin C).

So long as she was not in pain she was willing to eat and try things. Her mood seemed positive and by week 5 she began to be able to eat oxbow orchard grass which is softer than her preferred meadow hay. I had sourced this for her specifically. By week 6 she was eating oat hay (soft green burns this year's cut) as well and her Metacam was reduced to once a day (i give this to her deliberately before bed which is when she eats her hay most). However, she tries to eat her meadow hay and still cannot. I think she will need another dental soon (we are now on week 8) as I suspect small spurs may have formed again during this period of recovery.

My vet had been told by the specialist cat vet that it can take 12 weeks to heal even a stabilized broken jaw. But my reply to him was "Calcium Loves Bunnies". I felt cat protocols were not applicable to rabbits and their individual uptake capacity. In summary

While each case of this must vary enormously, I feel if there is a possibility of healing, then the most important thing is to keep the bunny out of pain *with injectable meds* if possible so as to not stress the jaw or bunny orally and then to adapt the diet accordingly. A specialist bunny vet is needed for advice on this condition as is a good dentist to keep on top of the spurs and do multiple and accurate x-rays both diagnostically and for follow-up.

Good nursing, gentle care of the head and face and keen observation of the bunny's eating and progress are required by the pet owner and a good knowledge of your own bunny's mood and normal state. Administration of subcutaneous fluids can be supportive to the kidneys during long-term use of Metacam though this bunny had done well in drinking and eating a normal diet of herbs for extra fluids.

Bearing in mind what I have been through I cannot recommend pinning a bunny jaw and would not alter my actions if I had had the money or could do it again. my main concern now is that Moss' s teeth do not suffer long term from this accident and that somehow she can adapt her bite and avoid future regular dentals - especially as her teeth were so good before and she such a big hay eater. her health otherwise remains good as is her mood and her brave struggle to get well and the comfort she took from close contact with her own her bunny family has been invaluable.

The quality of life is a very important factor in this condition - perhaps the most important. 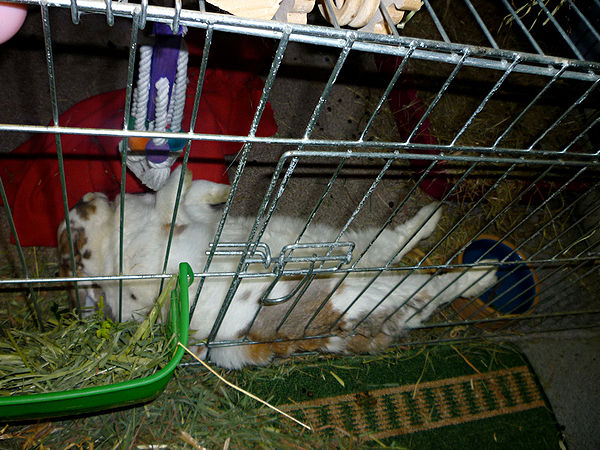 This is Moss today, 8 weeks on, relaxed and able to flop again in her pen on her back, normal behaviour for her. I hope for a full recovery.

I’m so pleased to report that the weight of Moss had remained stable. She only had a very few tiny spurs on her lower molars. Moss is now able to eat read grass as well as orchard grass. The bone callus over the break had reduced in size and the vet believes the bone and surrounding tissue is reconstructing and healing really well. He said the swelling had subsided dramatically since he last saw her. We didn’t x-ray as it won’t influence what we're doing as we are just treating symptoms. She’s down to one dose of Metacam a day now, which is given orally mixed in with some oats. The vet believes, furthermore, that the bite of Moss had realigned even further and hopes that eventually, it will be back to normal and not need regular dentals at all again.

All this has been achieved without any pinning or invasive surgical operations, just pain control and creative feeding and sympathetically informed adjustments to her diet.

Special thanks go to Jay whose sharing of her bunny's experience with me helped me to make my decision and helped me with feeding Moss. RIP Maddie who went before and helped Moss to survive thus far.