Trancing rabbits is the action of placing rabbits on their back to induce a paralysis known as tonic immobility, death-feigning, apparent death, or dorsal recumbancy. The action is also known as the immobility response, hypnosis, or the freeze response.[1]:61

Signs of a tranced rabbit

Your rabbit will display the following behaviors if it is tranced:

Rabbits can be tranced if they are physically restrained on their backs and their head is level or below their backs.[2] As long as the head is flexed with the chin against the neck, the rabbit remains immobile.[1]:61

Why not to trance video by Animal Wised.
A good video (with a TI segment) by Sarah Wainscott. A course assignment for her Master's degree program.
A rabbit that accidentally tranced himself. 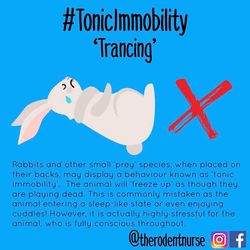 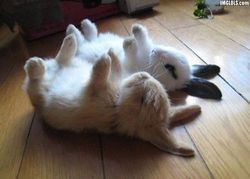 Contrary to popular belief, rabbits in a state of tonic immobility are not relaxed, hypnotized, or insensitive to pain.[3] Scientists believe that this is a defense mechanism brought on when a rabbit has already been 'caught' by a predator. If the rabbit appears dead, the predator may release its grip momentarily and allows the rabbit to escape. Research has shown that rabbits in this state show an increased heart and respiratory rate with elevated plasma corticosterone levels, indicative of fear-induced stress.[4]

The stress caused by this position can be fatal if rabbits are already suffering from respiratory and cardiovascular disease, and the sudden transition to from passive and active escape can be unpredictable and instantaneous which can result in significant injury to the rabbit.[3] Sudden noise or painful stimuli can interrupt the trance and there is considerable variation in individual susceptibility to the technique.[1]:61 One example story from a rabbit rescue of a rabbit that died from being handled in a trance for an extended period of time while groomed.

As a result, it is inappropriate to advocate the use of the immobility response in order to promote bonding between a rabbit and an owner, but it is justifiable in veterinary practices in order to avoid unnecessary anaesthesia.[1]:61

Below are some relevant discussions about rabbit trancing.