From WabbitWiki
(Redirected from Bloat)
Jump to: navigation, search

Acute gastrointestional dilation is a syndrome in which the stomach suddenly expands (dilates) due to excess gas and fluid. The condition is more commonly known as bloat in rabbits but is also called gastric dilation, gastric dilatation, and intestinal obstruction.

Unlike GI stasis, there is no history of a painful or stressful event, and diet does not play a role.

Mucoid enteropathy can also be a reason for gastric dilation, but the onset is usually more gradual than when due to an obstruction.[1] 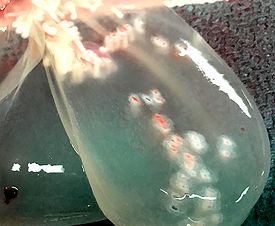 A hydatid cyst from the tapeworm Echinococcus granulosus inside a rabbit's abdomen. "Be very careful where you let your rabbit graze outdoors, and make sure all grass and weeds you bring in for them to eat are thoroughly washed!" - The Rabbit Doctors

Rabbits continually secrete saliva and cannot vomit, so fluid collects in the stomach, which distends rapidly with fluid if ingesta cannot pass through and down the digestive tract.[2]:325 Gas is produced, which causes further distension.

Typical foreign bodies that can cause an obstruction include felts of impacted matted hair, whole dried pulses, pieces of carpet fiber, plastic, rubber or other small objects.[1][2]:325 The small intestine is the usual site of obstruction, but it can also occur in the pylorus (lower stomach).[2]:325

While hair balls (trichobezoars) in the digestive system are normal, felts of compacted hair are not and can form obstructions in a rabbit's digestive system.[2]:325 During molting, large felts of hair can be ingested during grooming — these felts of hair are found more often on angora rabbits and fluffy dwarf lops, although any breed can be affected.[2]:325 It is also theorized that these felts are formed in the cecum and ingested whole with other cecals.[1]

Rabbits with dental problems appear to be especially prone to intestinal obstructions. Rabbits with incisor problems cannot pull hair out effective, and large mats can form before the rabbit can remove them.[2]:325

Inflammatory lesions or tumors in the wall of the intestine can cause obstructive disease at any site along the digestive tract, including the colon.[2]:325 Some examples include the following:[2]:325-326

Prompt treatment is required for this painful and stressful condition.

Effective painkillers (analgesia) and fluid therapy is important, and a low dose fentanyl/fluanisone provides analgesia, sedation and vasodilation that facilitates intravenous fluid therapy.[2]:70 Subcutaneous fluids will be ineffective in restoring and maintaining blood pressure and correcting dehydration and electrolyte imbalances, and intravenous or intraosseous fluid therapy should be used instead.[2]:70

The stomach can be decompressed with a stomach tube, which should be done after the rabbit is sedated with isoflurane or sevoflurane.[1][2]:70 Decompression by other techniques such as trocarization and in-dwelling catheters are not recommended in rabbits, as gastric rupture is a likely consequence.[1]

Clumps of hay, hair, and other ingesta may repeatedly block the orogastric tube, prohibiting decompression.[1] If this occurs, immediate surgical intervention is indicated. Surgery is straightforward and successful if the case is presented early and surgery is performed rapidly.[2]:326 However, there are many potential life-threatening problems associated with surgery on the intestines (enterotomy) in rabbits.[2]:326 Occasionally, some intestinal foreign bodies may pass with decompression, treatment for shock, and supportive care alone.[1]

Motility stimulants such as metoclopramide, cisapride, and ranitidine should not be used before surgery due to the possibility of intestinal rupture.[2]:70,326 However, they may be used post-operatively safely.

Oral intake of food is necessary only after the obstruction is relieved, and high–simple carbohydrate, high-fat nutritional supplements are contraindicated.[1]

Antibiotics are usually recommended because of the potential of enterotoxemia associated with shock, gastric compromise, and potential abdominal contamination at the time of surgery.[1] Choices include metronidazole, trimethoprim sulfa, or enrofloxacin.

Gram positive antibiotics are contraindicated in rabbits as they will suppress the growth of beneficial flora, allowing overgrowth of enteric pathogens.[1] Do not orally administer lincomycin, clindamycin, erythromycin, ampicillin, amoxicillin cephalosporins, or penicillins.

NSAIDs and other drugs that may lead to renal compromise should also be avoided until full recovery or at least 3 days postoperatively.[1]

Corticosteroids should also be avoided because they have associated with gastrointestinal ulceration and hemorrhage, delayed wound healing, and heightened susceptibility to infection in rabbits.[1]

The following are a few stories about encounters with bloat: