Rarely, neutered males may also gather and transport nesting material but with no fur plucking behavior.[3] It usually stops when the rabbit grows older. 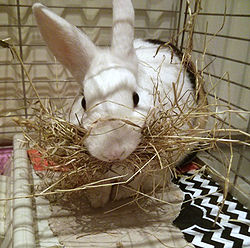 A rabbit with a mouthful of hay to make a nest.

Below are symptoms of false pregnancies in rabbits.[1]

Because rabbits ovulate reflexively in response to sexual stimulation, the proximity of a male, an infertile mating, or mating behavior between two females housed together can stimulate ovulation and result in pseudopregnancy.[1][4] However, it can also be observed in female rabbits with no contact with other rabbits. Once reflex ovulation takes place, it results in the formation of corpora lutea that secrete progesterone.[2]

Although there are anecdotal reports of treating pseudopregnancy in rabbits with hormone preparations, in most cases, treatment is unnecessary as the condition is self-limiting.[2] Repeated false pregnancies can be prevented by spaying or separating rabbits that are stimulating each other.

The nesting behavior usually lasts 1 to 3 days, after which the rabbit will resume normal activities.[3]