Because this is a wiki dedicated to general pet rabbit care, we believe all pet rabbits should be spayed and neutered and not given the opportunity to make more babies. With the amount of rabbits available for adoption in local shelters and rabbit rescues, we do not encourage the casual breeding of rabbits without obtaining the healthiest of stock available from reputable breeders as well as a responsible plan for the babies that does not encourage dumping intact unwanted rabbits in the streets or in the shelters. See Breeding for more details.

However, in the event of an accidental pregnancy because you placed two intact rabbits together of the opposite sex out of ignorance or on accident, the following information should be helpful in dealing with the situation.

Some tips about intact rabbits:

Fetal palpation is possible from 10-14 days.[1][4] Pregnancies can be detected radiologically at 11 days.[1]

If your rabbit is nesting and has pulled out fur, expect babies within the next week unless it is a false pregnancy.

The links below contain more information about how to detect a rabbit pregnancy.

The following pages are from rabbit breeding sites. Please do not take this referral as condoning rabbit breeding for the common house rabbit owner. We provide these links purely for information.

The domestic rabbit gestation period is generally 30-32 days.[5] About 98 percent of normal litters will be kindled between 30 and 33 days after breeding but a small percentage may kindle as early as 29 days or as late as 35 days.[6] Gestation lengths are generally longer with smaller litters.[6] You can start counting the days from the first observed or suspected mating.

If you have discovered that one of your intact female rabbits has become pregnant, please consider giving the doe an emergency spay to terminate the pregnancy. A pregnancy detected after 2.5 weeks is probably too far along for an emergency spay without harming the mother,[7] but talk to your local rabbit-savvy veterinarian to get a professional opinion. There are enough unwanted pet rabbits in shelters all over the world, and there is no need to bring more into life without the firm knowledge there will be loving permanent homes for every single one of them until the end of their natural lifespan.
An example video of rabbit's stomach moment roughly 16 hours before giving birth. source
For comparison... a rabbit's normal GI tract wave movement from peristalsis. source

Taking care of a pregnant rabbit and her litter

Starting the last week of her pregnancy, mother rabbits should be given unlimited pellets and alfalfa hay to eat. These extra calories and nutrients will help her growing babies as well as help her produce sufficient milk. Nutritional deficiencies in vitamins A and E, iodine, and selenium may cause aborted litters.[8] Dandelion greens, dill, and borage are believed to help a doe produce more milk for a large litter.[9]

Please immediately separate the male from the mother if you have a surprise litter. The male can impregnate the female again immediately after giving birth and result in litters 4 weeks apart, which can be harsh and fatal to the mother and the babies. 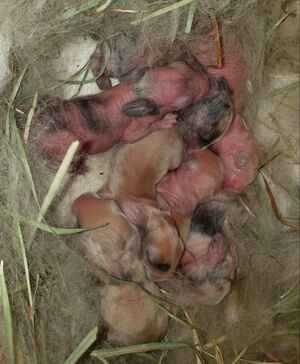 Nestbox. The nestbox should be about 12x14 inches, and the bottom should have a couple of drain holes. The sides can be about 8 inches high, but the front should be no more than 4 inches where the mother rabbit will enter and exit. The high sides will prevent the kits from wandering out of the nest area, which can lead to overexposure and death. A cardboard box may do temporarily but will get soggy and need to be replaced. Dirty and damp areas inside the nest should be immediately spot-cleaned and replaced with clean materials. The nest box can be removed once the babies are 18 days old.

Bedding. Line the nestbox about 2/3 full of clean soft hay, straw, or shredded paper. Avoid using stalky hay such as alfalfa for the nest. The hay should be able to be bent in a circle without breaking.

Fur-lined hollow. Make a small bowl-shaped hollow in the middle of the bedding in the nestbox and fill it with fur from the mother rabbit. If she has not pulled any out herself, either try gently pulling it out of her dewlap or belly or clipping some off. There should be enough fur to cover over the babies.

Babies. Place the babies in the hollow you made. They will burrow to the bottom and remain there until the mother rabbit stands over them to nurse.

The nestbox filled with soft bedding should be provided at around 28 days of gestation. Avoid putting the nest box where the doe usually has her litter area. Nest-building behavior from the pregnant rabbit will involve burrowing and pulling of fur from the dewlap, flanks, and belly to line the nest and expose the nipples. She will also start carrying around mouthfuls of hay and rearrange them in the nest to her satisfaction.

If the doe starts using the nestbox as a litter box before she has her litter, clean out the box, put in fresh material, and move it to another corner.

If the mother rabbit builds her nest outside of the nestbox, you can carefully pick up the nest material and place it in the box, then move the box to her chosen spot. This process may need to be repeated two or more times for stubborn does until she leaves the nest in the box.

The birthing, or parturition, usually occurs in the early morning during their normal resting period.[5][10] Even in large litters, parturition will take only 10 or 15 minutes.[10] Uncommonly, some births may span 1 to 2 days and still result in the birth of normal kits.[11] The rabbit kits will be born hairless with ears and eyes closed. A mother will sometimes lick the babies as they are born and quickly eat their placentas.[10]

Some problems that can arise during the birthing process:

If the mother has her babies on the cage floor instead of the nest box, place them in the nest box and cover them with fur from the mother rabbit's belly, plucking more from her if needed. If the babies are not caught early enough, they can die from cold exposure.

If any stillborn or dead kits are found in the nest, they should be immediately removed upon discovery. If the parents were both dwarfs, you may find under-developed peanut babies that will pass within a few weeks of birth.

The following are some more resources on this topic:

After the babies are born, a mother rabbit will leave the nest and return once every 24 hours at night for 3 to 4 minutes to allow the babies to nurse. Only rarely does the mother rabbit immediately nurse the babies after they are born. Usually the first nursing will occur the night after the kindling. The preferred mealtime is between midnight and 5 am.[12]

When she arrives, the mother rabbit will immediately hunch over the young in a nursing posture. She will not lie down like a cat does to nurse. The babies will rear up, find a nipple, and suckle rapidly. Typically, significant amounts of milk are obtained only during the second minute of nursing -- a baby can gain up to a third of its body weight in this short session.[10] A baby rabbit can drink up to 20% of its body weight in a single nursing.[3]

When the time is up, the mother rabbit may lick the babies to stimulate urination and defecation, then jump away, defecate a few hard feces, and leaves the nest, even if some babies may not have received any milk at all due to competition.[10]

The following are some videos of the natural nursing process:

If the baby rabbits do not look to be fed fully, especially in a large litter, the mother rabbit can be held for supplemental feedings if necessary. The following are a few videos of the process:

Similar to other animals, mother rabbits may have miscarriages during their pregnancy. When it occurs, you may find copious amounts of bloody vaginal discharge from your doe with small fetuses. Please consult with a rabbit-savvy veterinarian to make sure your rabbit fully finishes aborting the litter and recovers appropriately.

The following links contain some graphic images of what aborted fetuses may look like.

The following articles include more information on what can cause dead fetuses: