Head tilt is a condition in rabbits also known as wry neck or vestibular disease where the ear is held downward toward the ground and maintained in a position other than normal. The vestibular system coordinates position and movement of the head, and when a disease affects this system, it most consistently results in head tilt.[1] Another term often used is torticollis, meaning that the neck muscles are contracted; however, this is a consequence of the condition and not the cause. It may also be referred to as otitis media (middle ear infection) or otitis interna or labyrynthitis (inner ear inflammation). 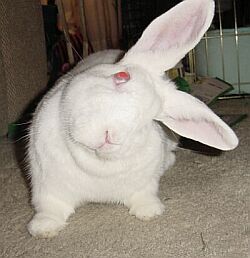 Head tilt is commonly caused by the following:[1][2]

Lop-eared rabbits are more prone to ear infections, while dwarf breeds, older and immunosuppressed rabbits may be more predisposed to signs due to infection with E. cuniculi.[1]

In the US, head tilt can also be caused by Baylisascaris larva. Rabbits may ingest hay that has been contaminated with raccoon feces. This parasite does not occur in the UK.[2]

In pet rabbits in the UK, the two main causes of vestibular disease are pasteurellosis and E. cuniculi infection.[2]

For head tilt due to an ear infection, antibiotics will be prescribed after a culture & sensitivity test. Depending on severity, long-term antibiotic treatment may be necessary, on the order of 4-6 weeks minimum to several months.[1] Broad-spectrum oral antibiotics used to treat the condition include enrofloxacin (Baytril), marbofloxacin (Zeniquin), and trimethoprim-sulfa (Tribrissen, Septra, Bactrim, Cotrim, Sulfatrim).[1] If anaerobic infections are suspected, oral drug treatments include chloramphenicol (Chloromycetin, CHPC) or azithromycin (Zithromax) which can be used either alone or combined with metronidazole (Flagyl).[1] Be careful with prolonged high-dose metronidazole as it can be potentially toxic to the vestibular system.[1] For injection drugs, treatments include penicillin, penicillin G benzathine, or penicillin G procaine.[1] Remember, penicillin-type drugs should never be prescribed as an oral drug as it can cause fatal enteric dysbiosis and enterotoxemia.[1]

For head tilt due to E. cuniculi, see the article page for more information.

Severe vestibular signs such as continuous rolling or torticollis and seizures may be treated with diazepam (Valium) or midazolam (Versed).[1]

Meclizine (Bonine, Antivert, Meclizine Hydrochloride) is also a drug that may be prescribed to reduce nausea and induce mild sedation.[1]

See the following videos for some sample exercises that can be done for head tilt rabbits to help them regain their balance and neck support:

The following are some online communities that specialize in helping disabled rabbits and rabbits with head tilt.

The following are some stories and social media pages of rabbits with head tilt.