"A change in breeders' attitude and breeding practices is mandatory because neither the permanent elimination of animals not "fitting" a fancy standard nor the continuous production of defective genotypes is legal." - Gerlitz S., Wessel G., Wieberneit D., & Wegner W.

Common symptoms of rabbits exhibiting megacolon include the following:

Megacolon often comes in episodes, characterized by flare-ups in between periods of relative improvement. 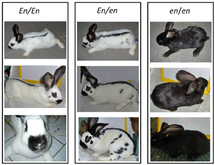 A diagram of the En gene phenotypes in the English Spot breed. 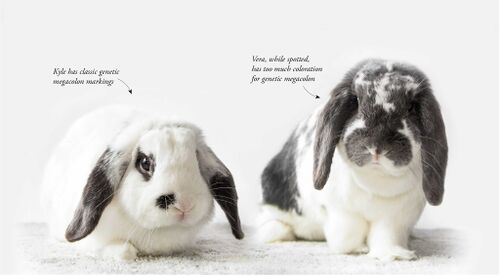 During early cell migration early in the rabbit's embryonic development the KIT gene expresses itself resulting in potential problems. KIT controls some cell processes such as cell division and cell movement (migration). This includes the development of cells in the GI tract and cells called melanocytes (melanin). This results in a large reduction of cells to the rabbit's outer muscle wall in the GI tract (cecum and ascending colon). These pacemaker cells control the rate and strength that the outer muscle wall contracts that help move things along in the affected area. This is also the cause for the reduced number of spots on the rabbit's fur.

At this time there is no conclusive test for the disorder. The diagnosis is presumptive in rabbits where other causes of similar symptoms are ruled out by testing or unsuccessful treatment.

Common support tips for rabbits with megacolon include the following:

The following are some communities of megacolon rabbit owners: