From WabbitWiki
(Redirected from Paralysis)
Jump to navigation Jump to search

Paralysis is defined as loss of the ability to move a body part. Paresis is defined as slight or partial paralysis. There are many reasons that can cause these conditions, and it is important to take your rabbit to the veterinarian as soon as possible once you notice any of the following symptoms:

See Veterinary emergencies for other symptoms to watch out for.

Floppy rabbit syndrome (FRS), also known as floppy bunny syndrome or flop bunny syndrome, is an acute neurological condition that affects rabbits and has been reported in the UK and USA.[1] It is characterized by a sudden inability to hop around. The muscles of the legs and, in some cases, the neck are flaccid.

The cause is not known, although there are many theories about the cause, including hypokalaemia and plant toxicity.[1]

One theorized cause of FRS is a lack of selenium utilization, either due to a diet lacking in selenium or the Vitamin E necessary to process selenium, or possibly some rabbits' bodies are inefficient at processing selenium. Vitamin E supplementation seems to help rabbits in these categories utilize selenium; this may be as simple as mixing the contents of a 200 IU Vitamin E capsule with a slice of banana and offering it to the rabbit on a daily basis.[2]

Rabbits are able to eat and drink if food is placed within reach.[1] Many cases will recover with supportive care, often within 3 days, though re-occurrence is possible.[1]

Here are a few videos of rabbits in different stages with Floppy Bunny Syndrome.

The following are a few stories about rabbits with floppy rabbit syndrome.

The following are a few stories about rabbits with the condition: 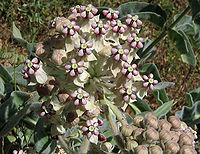 In the south-western US, the ingestion of the woolly pod milkweed (Asclepias eriocarpa) can cause a condition called head down disease.[3] Affected animals develop paralysis of the neck muscles and loss of coordination. Drooling, rough hair coat, subnormal temperature and tar-like feces occur.[1]

Consumption of about 0.25% of an animal's body weight is lethal.[3]

Recovery has been reported if the rabbit has not consumed too much of the weed and food and water are placed within reach and the rabbit held so that it can eat and drink.[1]

Splay leg is a non-specific term that is used to describe any condition affecting the limbs that prevents standing, usually due to the inability to adduct (draw toward the body) a limb. The hindlegs are most frequently affected, although the condition can also be seen in the forelimbs.[1]

Although the condition is usually congenital, it can be exacerbated by environmental conditions, such as being raised on a slippery floor that gives no traction.[4] Congenital skeletal abnormalities can result in subluxations or limb deformities that prevent normal locomotion.

Treatment is not available for most cases, but rabbits can cope well with the disability.[1]

Some more resources about the condition are the following: