From WabbitWiki
(Redirected from Rabbits and Children)
Jump to: navigation, search

This article is incomplete because it lacks depth or is unfinished. Help by expanding it.

Under close supervision, children and rabbits can interact well. 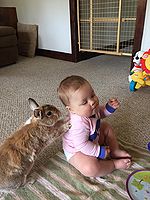 Here is Nala playing with Meredith. Photo by PattiZ. 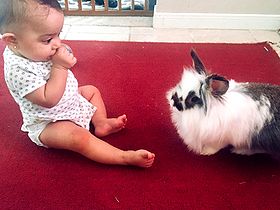 Baby & rabbit getting along. Photo by /u/goatcheesebandit

Below are pages with more information about rabbits and children.

Are Rabbits Good Pets for Children?

Here are some anecdotes about obtaining a rabbit for a child that did not end well.

Here are some sites with more information about bonding your rabbit with other animals.

See our Bonding article for more information about how to bond your rabbit with another.

Cats and rabbits in the same household can be very compatible. Some cats and rabbits may not get along with their own species but may happily live with each other.

However, caution should be taken with introductions, especially between adolescents of either species. A lively teenage cat can put dangerous claws in a rabbit. Very young and small bunnies should not be paired with a full-grown cat. Big rabbits can bully a lighter weight cat.

Cats of all ages should have their claws trimmed to decrease the chance of injury.

Please try to prevent the sharing of litter boxes between cats and rabbits, especially if your cat goes outdoors and/or eats raw meat. Infected cat feces can transmit toxoplasmosis, giardia, and cryptosporidiosis to rabbits; all of which can be fatal within a few days.[1] While rabbits may not directly ingest cat feces, rabbits can contract the parasites in households with cats by jumping in a cat's litter box, stepping in infected cat feces, and then ingesting the parasite when cleaning their feet.

Cat food should also be kept out of reach of rabbits. See Is it okay for my bunny to eat dog or cat food? for more details.

The following links have been provided for more information about cats and rabbits living together. 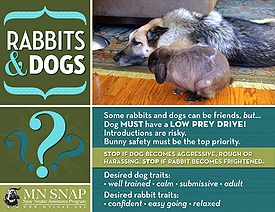 "Can rabbits and dogs be friends?" Info sheet by the Minnesota Spay Neuter Assistance Program, source.

Many people are surprised to learn that dogs and rabbits can often live quite harmoniously with each other. However, there are considerations to take into account when an owner wishes to introduce their animals. Generally, most dogs that are accepting and tolerant of cats are often comfortable around rabbits. Also, dogs that have not been allowed many opportunities to chase animals outside and are trained to remain calm during distractions are the least likely to antagonize a house rabbit.

Good training with basic obedience is imperative! If the dog is getting too rambunctious, owners need the ability to call their dog off the bunny or have them sit-stay or down-stay.

Younger and smaller rabbits tend to be higher energy than adult and larger rabbits. Dogs have relatively poor eyesight, but they have an excellent perception of quick movement; energetic bunnies will entice the dog to chase them because their quick haphazard movements are similiar to that of prey. Bunnies that are calmer and lazier are much less likely to be chased. It is recommended that the bunny condo or habitat is kept in a common area where the dog can see, smell, and hear the bunnies first for a few days to a few weeks before they are let out together. If you decide to keep the dog on a leash, it is imperative to keep slack in the leash. If you pull on the dog's leash and collar, it will stress and frustrate the dog and lead to aggression.

How to tell if your dog is ready to meet the bunny: If the dog is completely ignoring the bunnies when they are in their habitat, then you can bring the dog in when the bunnies are already settled outside of their pen. Do not introduce the dog when the bunnies have just been let out of their pen and are doing excited binkies and zooming around. Ask the dog to sit-stay or down-stay and give him treats to staying. Once the dog stops staring at the rabbit, you can release the dog and let him sniff the rabbits while on leash. Do not pull on the leash unless you are concerned for anyone's safety. Ideally, you want the animals to ignore each other, so treat and praise them for doing so.

For your rabbit's safety, please keep dogs and rabbits separate when you are not around to supervise. A playful dog can easily accidentally fatally injure a rabbit.

Please keep your dog's food out of reach of your rabbit(s). See Is it okay for my bunny to eat dog or cat food? for more details.

The following links have been provided for more information about rabbits and dogs living together.

Below are some links of peoples' experiences with rabbits and dogs coexisting.

The following are some warning stories about accidents with dogs and rabbits:

A guinea pig (Cavia porcellus), also called a cavy or domestic guinea pig, is an animal with similar housing, dietary, and health needs as rabbits. However, it is generally not advisable to keep rabbits and guinea pigs together for the following reasons:[2]

There are always exceptions to any rule, however, and there are some rabbits and guinea pigs who have appeared to form a strong pair bond. If kept together, the size difference should be kept to a minimum.[2] 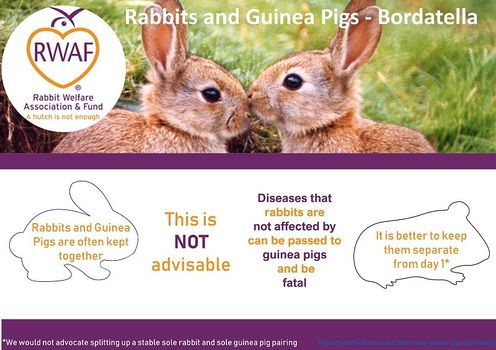 From the RWAF: "Rabbits and guinea pigs can live together? False: Sure, Timon and Pumba may have got on well together, but in reality, it is advised not to keep the two species together. Both rabbits and guinea pigs are very sociable animals and should always be kept in pairs, but it is safer and better for their welfare to be kept with their own species. Rabbit and guinea pig anaesthesia and surgery is much safer now, so it’s always best they have a neutered partner to keep them company."[3]

1) Rabbits are bigger than guinea pigs, and can accidentally injure them.

2) Rabbits carry different bacteria from guinea pigs, such as Bordatella, which can fatally affect their guinea counterparts.

3) Rabbits and guinea pigs both require different nutrients from their foods, which means that they need different diets. Sharing meals will mean that at least one of your pets will be malnourished. 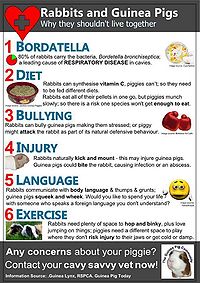 Rabbits and Guinea Pigs: Why They Should Not Live Together. Cheat sheet by The Guinea Pig Community. 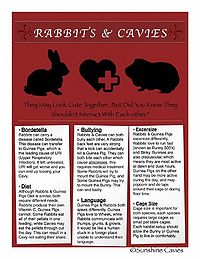 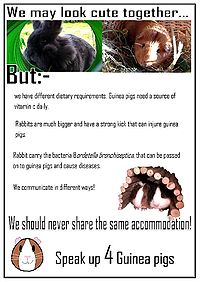 We may look cute together, but.... Speak Up 4 Guinea Pigs

The following links have been provided for more information about guinea pigs and rabbits living together.

Ferrets are not recommended as pets in the same household as rabbits.

Absolutely Not! Ferrets are innate hunters and will kill/ possibly eat the rabbit. Ferrets still have a great deal of their wild instincts in them, different from dogs, and will invariably go for the kill, given the opportunity. They eat meat, not greens, and so long as you have yours caged with your bunny, then one or the other is going to wind up hurt or dead. - My Ferret Pet

While ferrets make great, loving pets for the right people, they are never to be fully trusted. They are mischievous animals who always keep their owners on guard. This can be an endearing trait to some, but dangerous if you have prey animals in the house. There is no one specific way to ferret-proof a home because ferrets constantly test their boundaries and incessantly work to find ways into everything they are kept out of. - Ashley Hentz 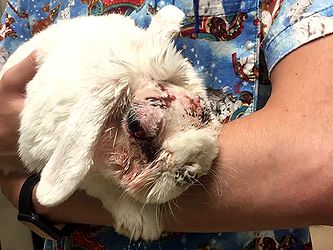 This rabbit was attacked and severely mauled by a ferret.Ferrets are a domesticated form of the European polecat. They are obligate carnivores and need to hunt (eat) as often as every four to six hours. Ferrets main use was for hunting rabbits, rodents, and moles. They are still used for hunting in some countries. 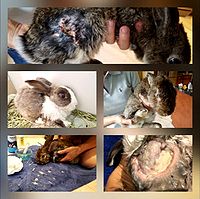 Example pictures (graphic images) of rabbits being forced to live in the same cage with chickens and roosters. They were forced to compete for food. Image source: East Coast Rabbit Rescue

Chickens and rabbits have several diseases in common. For example, often Pasteurella multocida is endemic in rabbit colonies. An infection of P. multocida can be a problem in rabbit production and is associated with respiratory symptoms that are commonly referred to as "snuffles." P. multocida infection of chickens can result in an outbreak of fowl cholera. Also, there is a chicken cholera that rabbits can contract. [5]

When rabbits and chickens or roosters are kept together, and they have to compete for food, the following can happen:

Recently we were called to a tiny barn area where about 30+ rabbits were trapped and been EATEN ALIVE by about 30 chickens and roosters!! The birds attacked the rabbits every day, killing all their babies, plucking their eyes out, and pecking their malnourished bodies until every rabbit became absolutely filled with horrifying abscesses while wallowing in filth. Wounds so gaping, necrotic, half-eaten, and extensive they defy the imagination. By the time we were able to get permission to take them away already 8 had died. Then one died on route to the facility, and another during emergency surgery. - East Coast Rabbit Rescue

Other rescued and injured rabbits that were housed with aggressive chickens: