This article is incomplete because it lacks depth or is unfinished. Help by expanding it.

An abscess is a localized collection of pus contained within a fibrous capsule. Abscesses are common in rabbits and can either be slow-growing or become large very quickly. Unlike cats and dogs, abscesses in rabbits do not often rupture and drain. The pus in a rabbit abscess is very thick and cheesy. Abscesses can extend aggressively into surrounding soft tissue and bone, and abscesses with bony involvement can be very difficult to treat, and require surgical intervention and prolonged medical care with a fair to poor prognosis depending on the severity and location. 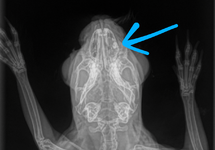 A nasal abscess found in the x-ray of a Netherland Dwarf rabbit displaying severe head tilt and chronic snuffles symptoms.

Affected rabbits often appear to not be painful unless bone infections or dental disease is present. Generally, abscesses are associated with a combination of inflammation (pain, swelling, loss of function), tissue destruction, and/or organ system dysfunction caused by the accumulation of pus.[1]

Abscesses occur most commonly on the face and are almost always caused by dental disease. Occasionally, they may be secondary to upper respiratory infections, ear infections, or trauma. Abscesses on the rest of the body are often caused by trauma, puncture, or bite wounds, abrasions, foreign bodies, skin boils (furunculosis), or bone infections (osteomyelitis).[1]

Pus-causing bacteria include the following:

Abscesses in rabbits are often diagnosed with the following methods:

Possible treatment options include the following:

Why are abscesses hard to treat?

A rabbit's immune system is different than the typical mammal. Rabbits are good at walling off bacteria but bad at killing them outright.[3] The pus in an abscess is also very thick and cheesy and does not allow for easy draining and flushing. Rabbits cannot tolerate all the antibiotics that can be used in other species. If not all the infected tissue is removed, recurrence is common.[2]:332

Rabbits are also very sensitive to stress, and the stress of illness, surgery, and medication suppresses the immune system and makes healing harder.[3]

There is a new, effective treatment for abscesses in rabbits called the Bicillin Protocol, developed by Marcy E. Rosenfield, DVM. It involves injections (not oral dosing) of Bicillin every other day for at least 8 weeks, until the abscess is cured. Bicillin is an injectable combination of benzathine penicillin and procaine penicillin, 300,000 units/ml. Penicillin must not be given orally to rabbits.

The following are various articles on possible treatments for rabbit abscesses in various locations.

The following are some anecdotal experiences with abscesses.